Modica: the 5 places not to be missed - PURA VIDA BAROCCA

Modica: the 5 places not to be missed

1 - Cathedral of San Giorgio
As it appears today, it is the final result of the six / eighteenth century reconstruction, which occurred following the disastrous earthquakes that struck Modica in 1542, in 1613 and in 1693. The latter, particularly devastating, struck the entire south-eastern part of the Sicily, commonly called Val di Noto. The reconstruction, sumptuous and magnificent as never before, was entrusted to the famous Syracusan architect Rosario Gagliardi, former author of the San Giorgio in Ragusa. The church, reopened with a solemn ceremony in 1738, has five naves, with 22 columns surmounted by Corinthian capitals. Sumptuous and magnificent, it contains precious paintings, such as the "events of the Gospel and the life of Saint George", created by Girolamo Alibrandi in 1513, known as the Raphael of Sicily; "L'Assunta", a painting by the Tuscan school, of the late Florentine Mannerist Filippo Paladini (1610); a naive painting on wood, "La Natività", by the Milanese painter Carlo Cane (uncertain attribution), of the second half of the seventeenth century; the canvas (1671) of the "Martyrdom of St. Hippolytus" by Cicalesius. And it is still possible to admire a marble statue of the Gagini school, the Madonna della Neve from the workshop of Mancini and Berrettaro, dated 1511; the polyptych of the high altar, made up of 10 tables, attributed to Messinese Girolamo Alibrandi for a long time as a work of 1513, but, according to more recent studies, actually works to the late Modarian Mannerist painter Bernardino Nigro of 1573. The "floor sundial" "and the" treasure "of the church are particularly noteworthy. The latter includes, among other notable pieces, the "Santa Arca", a work of art covered in silver, which contains the relics of the Saint. The temple is dedicated to the martyrs San Giorgio and Ippolito, and among the naves it is possible to admire a monumental organ with 4 keyboards, 80 registers and 3000 canes, fully functional, built between 1885 and 1888 by the Bergamasco Casimiro Allieri. The imposing cathedral, which has a bold tower façade, stands on a stairway of 250 steps, built in 1818 by the will of the Jesuit Francesco di Mauro, who, almost from the Corso, crossing the two underlying streets, introduces the splendid façade . 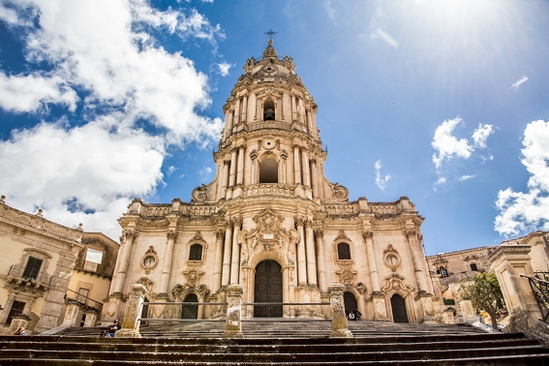 2 - Chocolate Museum
The chocolate, symbol and pride of this land, finds its maximum celebration in a museum that collects history and flavors. Opened in 2014 in a wing of the prestigious Palazzo della Cultura, it offers visitors an engaging itinerary that reveals curiosities and anecdotes about this delicacy. It starts from a very interesting documentary-bibliographic exhibition, entitled "The Chocolate of Modica in the Grimaldi Cards - 1746/1915", which collects a vast quantity of sheets and manuscripts, exposed on thirty panels, in which it is described, from the pre-Columbian era onwards, the history of chocolate and its evolution, from the bean to the processing to the finished product. In two other rooms of the palace are exhibited twenty-two chocolate sculptures, made by sculptors and young students of the Artistic High School "Campailla" of Modica: a curious and very sweet gallery. No less surprising is the miniature of chocolate Italy: a large bas-relief of about nine meters, arranged in the largest hall, entirely made of chocolate, where each regional capital is highlighted by representative sculptures. In an illuminated casket the gold medals and the decorations won by the Modica chocolate factories are exhibited in the International exhibitions from 1905 to 1910. The gallery of special wrappers allows to admire the achievements produced by the Consortium during special events and anniversaries. Finally, it is possible to observe the master chocolatiers at work in a real confectionery workshop, "u dammusu ro ciucculattaru", which overlooks via Grimaldi, where we witness the cocoa processing phases, together with the various sugar and spices , turns into the famous bars with a unique flavor. The museum is open from 10 am to 8 pm (open time). 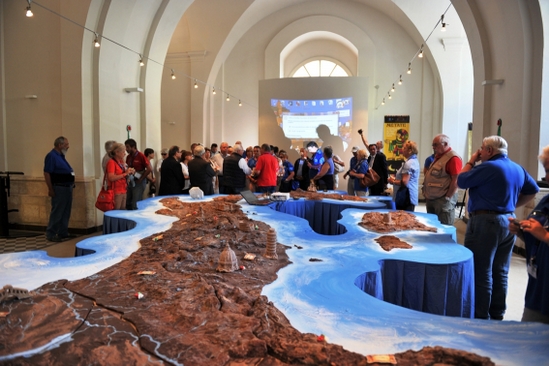 3 - Cathedral of San Pietro
The Cathedral of San Pietro is part, like the Cathedral of San Giorgio, of the list of UNESCO World Heritage. After the earthquake of 1693 the church was restored and today has a very refined facade divided into two orders, and embellished by four statues, depicting San Cataldo, Santa Rosalia, San Pietro and the Madonna, which enrich the second order, surmounted at the apex of the façade from the sculpture, in high relief, of a Jesus Christ in triumph. A monumental staircase embellished by the statues of the 12 apostles on the sides makes the entrance even more majestic. The interior, instead, has 3 naves with 14 columns that hold Corinthian capitals, a beautiful floor, from 1871, with inlays of white marble, polychrome marble and black pitch, and the sumptuous vault, rich in frescoes, depicting scenes of the Old and New Testament, begun in about 1760 by the local painter Gian Battista Ragazzi with the collaboration of his son Stefano, and completed around 1780, probably only by his son. The right aisle houses two statuary groups: the copy of the "Madonna di Trapani" by Francesco Laurana, attributed to Giovanni Pisano (uncertain attribution), and the polychrome "San Pietro and the paralytic", of the palermitan Benedetto Civiletti, in 1893. monumental organ, the work of the Polizzi brothers and inaugurated in 1924, is composed of 3200 pipes, 32 registers and two keyboards. 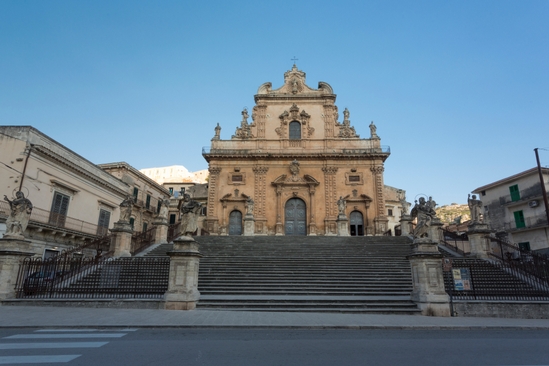 4 - The Garibaldi Theater
Built around the first half of the nineteenth century, when an old warehouse is adapted to the theater, it subsequently undergoes changes that give it an appearance very similar to the current one, through the expansion of the stalls, the increase in seats, the construction of three orders of boxes and a gallery, and a new facade with a very dry neoclassical print. The works lead to the subsequent reopening in 1857, when Verdi's Traviata inaugurated the new structure. In 1860 the Teatro Comunale changed its name and was named after Giuseppe Garibaldi. Center of cultural life of the city until the 40s of the twentieth century, home to many operas, prose shows, operettas, magazines. Many excellent names alternate in those years on stage, such as Emma Gramatica, Annibale Ninchi, Achille Maerani, and Gastone Monadi. Starting in the 1920s, it was transformed into a cinema, alternating film projections to theater plays. Even the sport enters the theater: in 1936 there are held the fencing championships. But after the Second World War, when a private management took over, the structure is in precarious conditions, the roof is falling, the plaster absent, the decoration deteriorated. The old temple of prose and lyric (it was important the fourth after the theaters of Palermo, Messina and Catania), transformed into a fourth-rate cinema, begins a slow phase of degradation that will lead to its closure in 1984. After a restoration lasted six years, the theater reopened its doors on 13 June 2000. The renovation works show the building in the manner in which it was between the second half of the 800 and the second post-war period. The bands of the balustrades of the boxes are rebuilt from an original track that had remained in the audience, the vault is totally repainted, with portraits by Verdi, Bellini, Beethoven and Mozart, while the entrance is enriched with decorative motifs from the late nineteenth century. But the real highlight of the new theater is above all the beautiful tondo placed on the vault of the hall, an important work of art that stylistically marks the rebirth of Garibaldi. Created by Piero Guccione in collaboration with Franco Sarnari, Piero Roccasalva and Giuseppe Colombo, this oil on canvas with a diameter of 440 cm depicts the façade of the Church of San Giorgio. Along its staircase are represented various characters: some related to the world of opera, such as Don Giovanni by Mozart, Macbeth and Norma, other traits from well-known masterpieces, such as the School of Athens by Raphael, the Kiss of Hayez, the Decollation of the Baptist del Caravaggio, the Tondo Doni by Michelangelo. 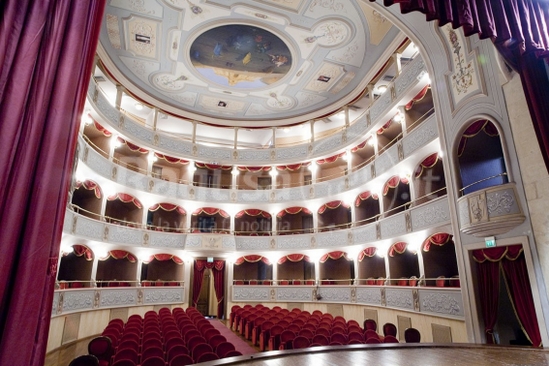 5 - The Castle of the Counts
Anyone who is visiting the city will certainly be fascinated by these ancient structures that dominate the old town from above, today as many centuries ago. The castle was built for military purposes as it stood on a rocky promontory with two sides on three with overhanging walls: the ideal place for such architecture. Of the original building remains a polygonal tower of the fourteenth century. The castle, which was modified and enlarged several times from the 8th to the 19th century, was the seat of political and administrative power. In fact, in addition to the military garrison, it housed the residence of the Counts of Modica and, later, the Governor of the county. In addition, it served as a prison, as evidenced by the rooms created in the rock and the two 7-meter pits, closed with gratings, used for the convicts. Starting from 1361 it was also the seat of legislative power: here were the processes of the Grand Court and the Court for the 1st and 2nd Appellations, while since the nineteenth century the Civil and Criminal Court of First Instance and the Court of Assizes. Furthermore, in its courtyard there was always a religious structure, such as the church of San Cataldo, of the medieval age, the church of San Leonardo, from the nineteenth century, and lastly the church of the Madonna del Medagliere built just in 1930. the Unity of Italy, the Prison, the Court and the Circumscariable Offices were transferred elsewhere, and the Castle was abandoned to the use of time. So today there are no longer many parts of the original fortress, such as the 5 towers and a large slice of the walls with its 4 doors. 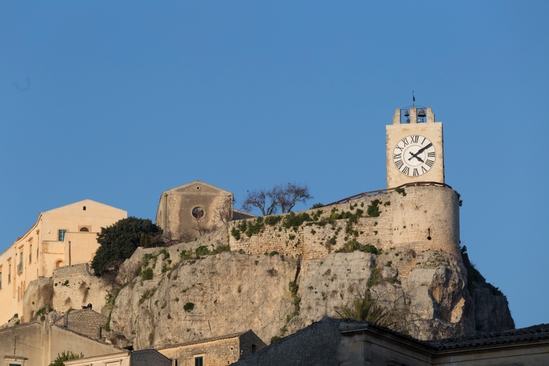